Lee Roebuck was born in country Goulburn NSW where the first Australian Motor Cycle Grand Prix was held in 1924. He first started racing dirt bikes in flat track, speedway and Moto Cross in his teens. Quickly racing through the ranks he achieved numerous podium wins, mostly racing flat track and at times beating the best riders in the country in the 125cc & 250cc categories on 125cc Yamaha and 125cc and 250cc Bultaco machines.

Roebuck’s most memorable and personal achievement in flat track racing was winning the “Terry McDonald” memorial trophy event at Mt Ginn raceway Canberra. This event was held in memory of good friend and mentor Terry McDonald on his Australian Short Circuit winning Hagon/Bultaco. Terry was killed whilst competing in the world Motor Cycle Grand Prix at Corfu Greece in 1971.

Lee’s first taste of road racing was in the 250cc Production Classic at Bathurst in 1971. Finishing behind well-known female rider Peggy Hyde he completed the previous two days at the Orange Short Circuit winning all 4 races on a 250cc Hagon/Bultaco.

Months later, his first 125cc GP bike was bought from Wollongong tuner/engineer Clem Daniels, this began a serious attempt on the National Road Racing Circuits with many top placing’s.

With a Yamaha 250cc production bike and 250cc & 350cc Yamaha grand prix bikes he started making his mark on the local racing scene, breaking lap records and eventually knocking off “King of the 250cc Production Bikes” Jeff Sale. He quickly became the man to beat in 250cc production racing, teaming up with Jeff Parkin to podium wins in the “Castrol Six Hour” races in Australia and New Zealand, “Adelaide 3 Hour” and “Calder 2 Hour” races in Australia. Graduating to the larger capacity production bikes for long distance races with top co-riders such as Graeme McGregor (twice junior Isle Of Mann winner) on a Frasers Motor Cycles 900cc Ducati SS, Paul Feeney on 750cc & 900cc Dealer Team Kawasaki’s, Bill McCulloch on 750cc Dealer Team Kawasaki, Ron Boulden on a Yamaha Dealer Team 1100cc, and Steve Fisher on a Frasers Motor Cycles 600cc Factory Ducati. With numerous podium wins and top placing’s in all classes, most notably taking 3rd  outright in the 1981 Coca Cola 800, qualifying on pole on the smallest bike in the race with co rider Steve Fisher, stormed through the field  from a slow start to win two classes and third outright.

Taking out the 1977 125cc Australian Road Race Championships, Roebuck riding for Honda, had to beat top riders Clive Knight (Morbidelli 125cc) and Barry Smith (125cc Yamaha International and Isle of Mann TT winner), and in doing so took lap records on every circuit that year. Also Runner-up to Team Kawasaki’s Gregg Hansford (International and Runner-up in the 250cc & 350cc World Championships) - as King “Kenny Roberts” remarked on Hansford, “he is the most competitive man on the International circuit”.

Hansford and Roebuck clashed on several occasions with Hansford always coming out on top. Roebuck says “I would bust my ass racing with him, while he just seemed to cruise - he was so smooth and precise”. The closest Roebuck ever was to beating him was at Simmons Plains, at the 1977 round of the 250cc Australian Championships, where the lead changed hands several times on every lap. Roebuck says “I’d lead into the last corner of the race, thought I had covered myself when Greg rode up the inside on the curbing to take first. 100th of a second separated the two of us for the entire race and both took the lap record”.

Roebuck had many highlights in his early dirt riding days, but his most memorable and fondest one was winning the “Terry McDonald Memorial Race” at Mt Ginn, Canberra in 1972. On Terry’s Hagon/Bultaco, he remembers vividly not finishing a race that day.

My bike would stop after about 2 laps into each race, but when pushed back to the pits it would start again. It was very frustrating because “Nobby” (Phillip Roebuck) was having trouble tracing the problem. This was the 3rd race that day that this problem had occurred. With the main race getting closer, Nobby was frantically pulling things apart to check, like ignition coils, CDI box - all sorts of things went through his mind. Now with the main race being called and everyone lining up at the start line, Nobby in desperation decided to drain the fuel to try fresh fuel, when he discovered a small ball of tin foil in the fuel tank which would shut off the fuel supply. He frantically removed it, topped up the tank for me to join to the race. If nothing else that day I so desperately wanted to win that race.  I gated in 2nd gear and was first out, I kept saying to myself “don’t look back they are right there lap after lap”. Then heading for the finish line I looked back to see that I had a clear lead from Kevin Fraser and Doug Penrose, I was so pumped, I think I could have out-rode anyone that day. I was ecstatic knowing I had won the very race I wanted, and having Terry’s mum present the trophy was the icing on the cake. 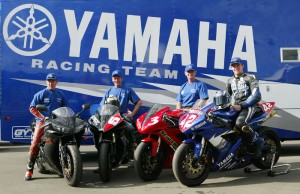 Lee at a Yamaha Photoshoot at Queensland Raceway.